[: en] The evacuation of a building can be unsuccessful when the occupants do not know the location of the emergency signs.
Only an 38% of people look for conventional emergency signage during the evacuation of an unknown building. This figure is due in part to the existence, in shopping malls or airports, of numerous commercial or informational signs that distract attention from evacuation signs. The fact that the occupants are directed following the person in front or to the exit they know can lead to congestion and serious problems during the course of the evacuation.
To improve the visibility of emergency exit signs, Eaton has created a new technology called Increased Affordance -Augmented Assistance-, that allows these to be illuminated as a flash or intermittently during the evacuation of a building, making them much more striking for occupants in emergency situations.

“The time spent evacuating a commercial building during an emergency can have a great impact on the safety of the occupants. Every second counts. By facilitating people's ability to identify exit signs, we allow them to respond more quickly and reach a safe place with the least delay » 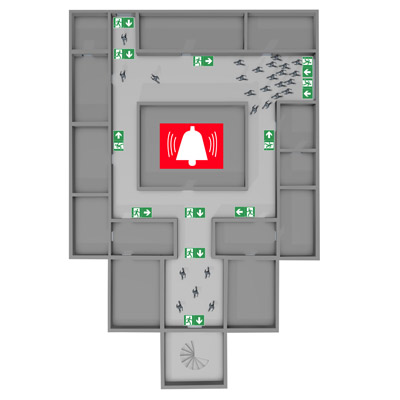 Evacuation of a building with technology Increased Affordance
With normal operation, the luminaires offer excellent visibility thanks to a high luminance that exceeds the minimum requirements in most countries.
When technology is activated Increased Affordance the visibility of the emergency signals is even greater through the emission of pulsed light or in the form of a flash, always respecting the minimum luminance levels established by the industry.
In summary, Augmented Assistance technology has many advantages: