More than 2.000 luminaires turned the stage of the Altice Arena in Lisbon into one of the most powerful shows of this year and a showcase for the world of lighting, among others. Being part of that assembly, 754 x Claypaky, 48 x Portman, 710 x Ayrton and 60 x MA Lighting, in control, were responsible for turning the stage into a waste of power and light, offering a unique event.
Without a doubt, Eurovision does not leave anyone indifferent. From the prospection, design and assembly to the staging of numerous artists, the truth is that Eurovision is positioned among one of the major European annual events that becomes a reference in the world of lighting and audiovisual.
A year full of LED novelties and technology, in which Jerry Appelt, lighting designer for the gala for several consecutive years, wanted to give prominence with a design based entirely on lighting only - supplied by Ampco Flashlight Group and Pixel Light - without incorporating no video element
Appelt looked for products that would give a lot of variety and versatility in each of the artistic numbers. The objective was to be able to achieve a different appearance for the representation of the 43 participating countries.
Among Claypaky's devices, 197 x Scenius Unico, 110 x Scenius Profile, 86 x Hepikos, 142 x Mythos 2, 50 powerful LED luminaires Axcor Profile 900 y 169 x Sharpy Wash were in charge of revolutionizing the scenario.
This year the hybrid mobile heads debuted at the Festival Hepikos, offering a perfect beam, that coupled with the possibility of a perfect wash, They combined an ideal versatility. "Its main use was to frame the huge curved trusses on the stage along with the trusses located in the engines. In addition, the interchangeable rotating prism was used to divide the light beam into several dynamic projections, which adds a larger dimension to the overall image, "says Appelt. Ola Mezig, head of production of ESC, adds: "its low consumption makes it crucial in a show that can produce lighting up to 18 hours a day, every day, for more than a month of tests and transmissions."
As a key light and complement for the follow-up shots, the Axcor Profile 900; while the Scenic Unico they went to Appelt, as well as in the 2017 edition, one of its main weapons: “I'm looking for accessories that can play the role of two, maybe even three different types of fixing, without compromising color, output, mechanical precision or the effects ». 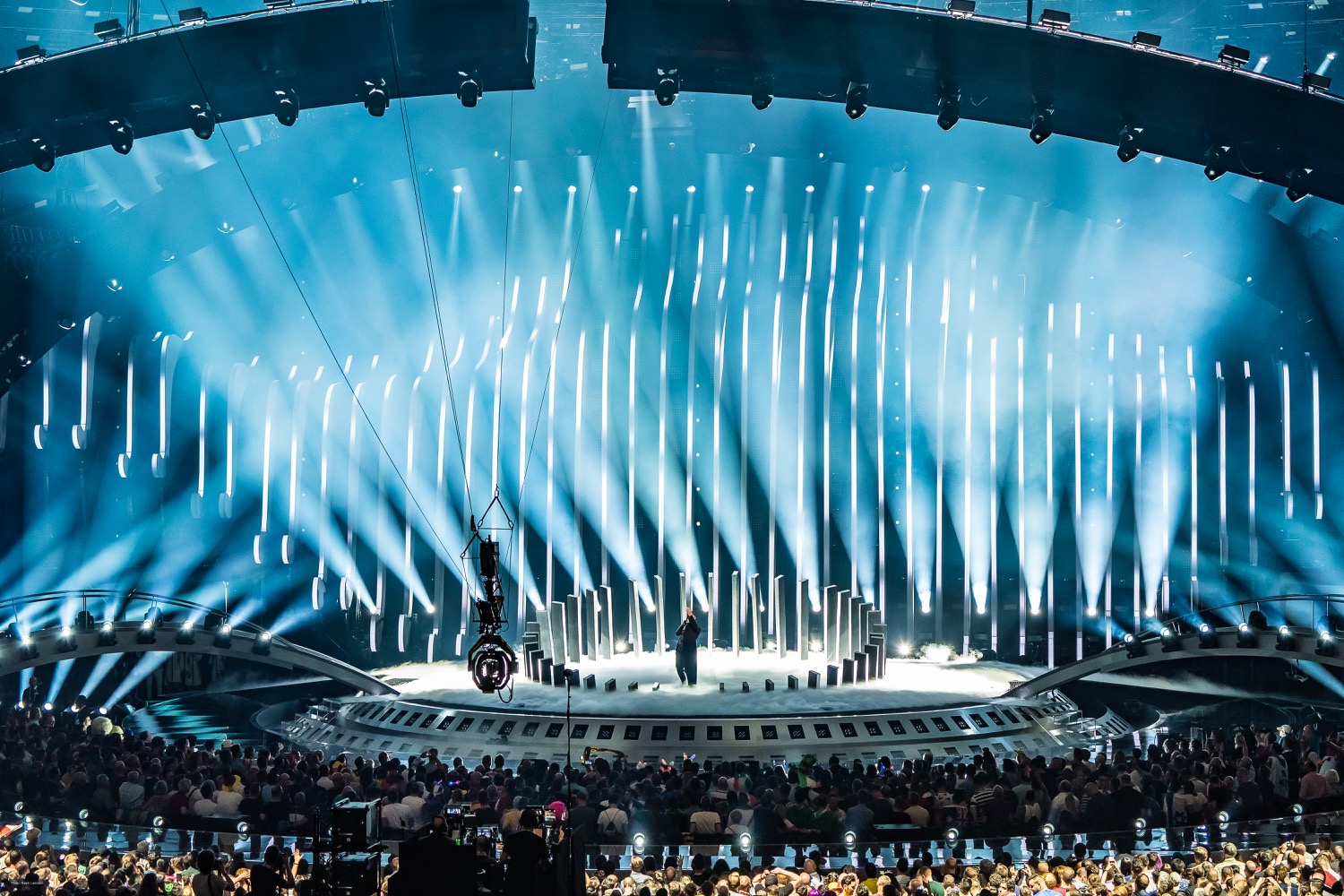 Lightweight, powerful and highly efficient optical heads were commissioned to Ayrton, the other major supplier of lights of the event and that this year debuted revolutionizing the world of lighting, transforming the stage in each staging.
Undoubtedly, one of the great protagonists of the night was the revolutionary Ghibli, A mobile LED head with blades, powerful, light and silent. The fronts of the balconies on the audience were equipped with 112 Ghibli luminaires as main lighting, offering a power with a low consumption adaptable to each performance.
Among the bets, 351 x Ayrton's MagicPanel FX They covered the back wall of the ambitious set of the set designer Florian Wieder. Star Cloth lights, pixel mapping effects and light rays are some of the functions of the MagicPanel FX. Also embedded in the back wall of the stage, 64 LED luminaires Mistral-TC they offered a beam of light from the bottom towards the amplitude of the stadium and 30 x MagicDot SX they delineated the outer edges of the circular walkways of the stage to increase the dynamism of the show with effects in the air.
In front of the audience, 96 MiniPanel FX mobile heads offered an 360º movement. Embedded in two rows around the stage's frontal decoration they projected washing effects, strobe effect in each of its pixels and effects combined with fast movements, turning each performance into a different space.
Finally, three lines of Ayrton's NandoBeam S60 luminaires 6 backlit the audience in the stands; «With such high performance, these LEDs wash they were perfect for the highest truss setting in this area, ”says Matthias Rau, technical lighting and production manager.
As a great novelty, Portman and his unmistakable P1 Retro Lamp and P3 Pix3l offered warmth and magic on stage. 36 P1 Retro Lamp units offered a curtain of light transporting the audience to a unique space. On the other hand, 12 units P3 Pix3l offered a set of taillights turned into a linear.
All this harmonized, as expected, under the control of MA Lighting. In the stage of the control 12 grandMA2 Full size presided over the control of each of the movements on the stage, along with 2 grandMA2 light and 6 fader wing. All under the baton in network of 39 MA NPU and 3 units of MA VPU.
One more year, Eurovision becomes one of the European events of reference, bringing together on stage the great brands of the world of professional lighting such as Claypaky, Portman, Ayrton or MA Lighting, among others; and offering the perfect combination to achieve the success of the Festival design without having any video component.
In Spain, Stonex is the official distributor of Ayrton, Claypaky, Portman and MA Lighting, among other well-known brands. As a national benchmark in professional lighting and stage engineering, Stonex brings more than 38 years of experience offering comprehensive solutions for the entertainment, entertainment and architectural sectors; comprising the design, supply, installation and maintenance of scenic equipment and premium lighting.