Under the design of the illuminator, Christien Methot near 24 bars Show Batten by Clay Paky and a GrandMA2 onPC were responsible for offering a play of light and color on the facade of the new store of H & M.
H & M, one of the largest fashion companies in the world, opened its last store in New York at the Herald Center, where its inauguration was accompanied by a total illumination of the facade achieving a dynamic visual design. 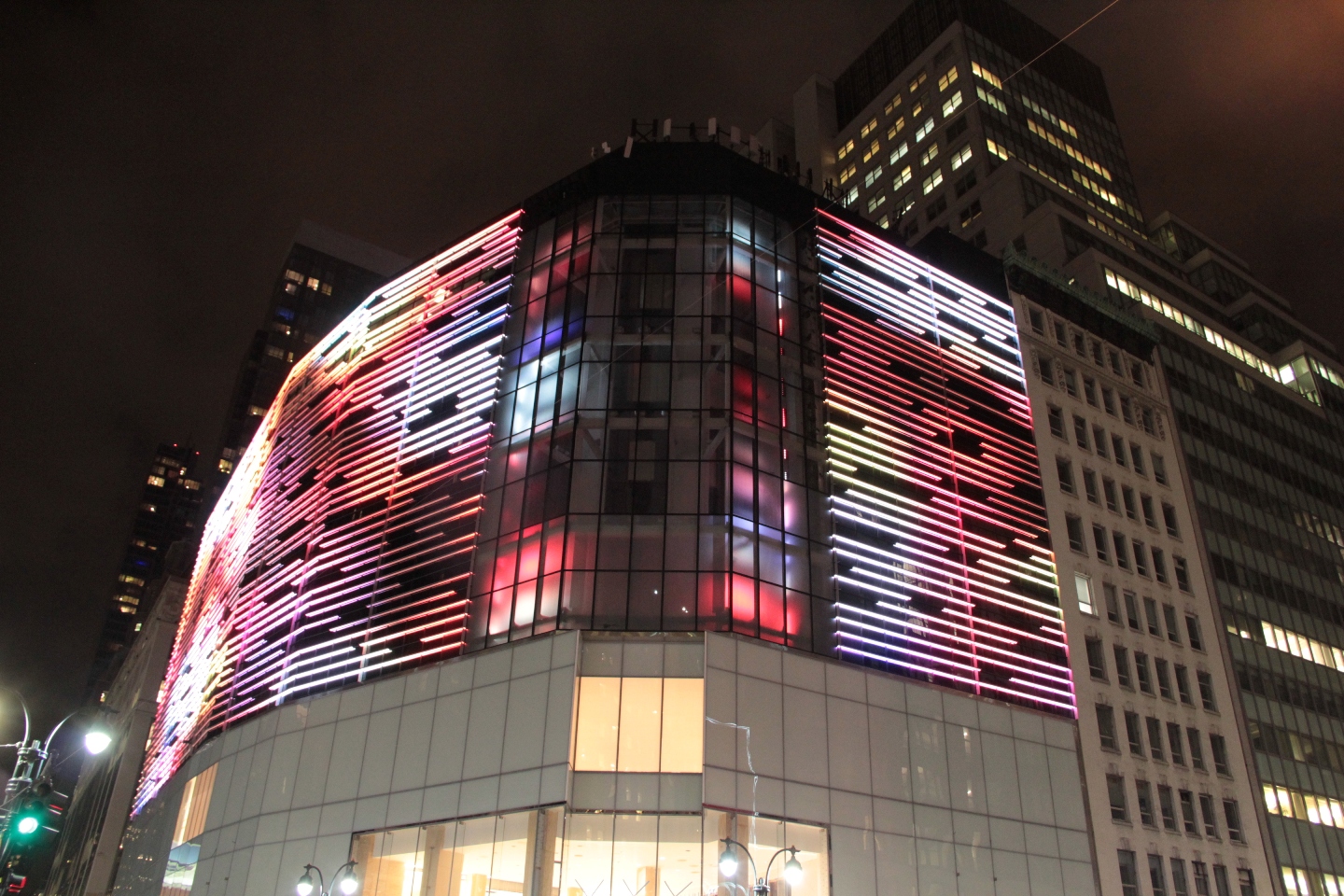 Next to a spectacular lighting, the new façade was topped by Barco's low resolution LED panels. Herald Center is one of the most visited fashion destinations a year and near 5.800 m2 have become the new space for H & M.
The initial idea of ​​the project had the installation of another LED mural right at the ends of the glass facade, but the regulation of the area did not allow it. The project had lighting and glass material allowed to create a good canvas to illuminate.
Methot's design for the facade managed to shine in the New York sky with a set of lights that made a perfect combination with the LED panels. Spiral lights, changes and effects together with the material of the glass façade They complemented perfectly with the change of color.
To achieve Methot's objective, they were used 24 Show Batten luminaires 100s de Clay Paky, 12 at each end of the glazed façade. The new Show Batten 100s is ato mobile LED bar with 10 RGBW luminaires, where each of the LEDs can be controlled individually.
"Our intention was to make the facade feel was part of a video content", Explained the designer. "We map the Show Battens within the Barco system, so we get a perfect combination of color and textures playing through the LED. On the other hand, control was through a GrandMA2 onPC and two PortNodes. "
Among the characteristics of Clay Paky's new luminaires is that it has 240º of tilt and can rotate quickly and smoothly. In addition, the luminaries Show Battens are compact and lightweight. Several bars can be placed in line or matrix with a fixed distance between the LEDs.
So Methot spoke about Clay Paky's luminaries, "I have been specifying them in many places. I love the possibility of tilt and zoom is fast and extremely useful. Another feature that stands out is the control of its 10 RGB leds. It is a great focus - Light and brightness! "
In Spain, Stonex is the official distributor of Clay Paky, among other well-known brands. With more than 30 years of experience in the entertainment sector, Stonex offers integral solutions for the entertainment, entertainment and architectural sectors, including design, supply, installation and maintenance of scenic equipment and lighting for professional use. In addition Stonex distributes the main brands of the market exclusively in Spain.